Germany-based Publisher of The African Courier, Mr Femi Awoniyi in this online interview, speaks on his experience as a Magazine publisher for 23 years, the state of the media and future of the industry.

You recently announced the relaunch of the print edition of your magazine due to what you explained to be the need to restructure operations in line with the dictates of a rapidly changing media industry faced with the constant challenge of sustainability. Tell us more about the challenges you have had to cope with?

The fundamental challenge is that of generating enough revenue to thrive. As an online publication, a small one at that, the potential of revenue generation through banner ad sales is very limited.
The challenge is that our readers can also be reached by prospective advertisers in other, sometimes even more effective, ways.
We as publishers try to reach readers through Google, Facebook, Twitter and Instagram. Advertisers would think why not advertise directly on these platforms instead of middlemen which we are?
In fact, Google and Facebook alone, collect almost 70% of European digital advertising spending.  It’s simply very difficult for online publications to compete with big digital platforms.

Is your experience and decision suggesting that digital-only publications are not sustainable?

What suggestions do you have for publishers and other media managers on coping with the disruption of the industry and sustainability concerns?

Quite frankly speaking, I wish I had a success formula. I don’t and I doubt that anybody does. We are all still learning and experimenting. The traffic you need to generate to become a force to be reckoned with as an online publisher demands that you invest for several years to build visibility.

However, most of us don’t have that kind of money. Small publishers, therefore, have to be creative about generating revenue such as offering other services. Many publishers are engaged in services such as PR agency, custom publishing and product marketing to earn additional revenue.

Looking back at your mission when The African Courier was launched in 1998, how well have you been able to accomplish them?

I would say that we have retained our relevance despite the universe of news out there on the internet. In fact, if we don’t report on certain issues, they will remain unreported. I am talking of issues concerning Africans living in Germany or the African diaspora, for example.

There are news and reports about some issues which can only be produced by publications like The African Courier for its readers. That’s why we have a very loyal readership which we have retained despite all the challenges we have had to contend with.

As an Engineer, why did you opt for a career in publishing?

I have always been interested in the news all my life. In fact, during my student days at the then University of Ife, where I studied Metallurgical and Materials Engineering, I wrote for newspapers on issues ranging from politics to the economy.

However, I became a journalist in Germany by accident. The realisation that there was no press product targeting the African community and my passion to address the challenges we face as a community made me venture into the press business.

Let me add that the encouragement of friends who assured me that I could do it was very critical to my starting The African Courier in 1998.

READ ALSO: WHY I RETIRED FROM THE PUNCH – AKINTOYE

What have you had to learn to succeed in the media industry?

Yes, we have been successful in building a media that is relevant, that people find useful to their lives. My work is an intersection between journalism and engagement and people see that. The African Courier could be said to have played an important role in the emergence of the organised black community in Germany in the past two decades. In that sense, one could talk of success.

One major lesson I have learnt about reader loyalty is that if you offer quality information that is relevant and useful to the target readership, you will be noticed and taken seriously.

However, I am not satisfied with the state of The African Courier, 23 years on. Most of the factors responsible for our situation are external but I also bear a lot of blame for not reacting timely to changes in the media industry. So, I can’t talk about success in that sense.

What is your assessment of media coverage of Africans and Africa by the media in developed nations?

The coverage of Africa has improved somewhat in the past two decades, but it’s still slanted – too much focus on crises and wars and the bizarre.

We have to realise that Western media coverage is influenced by several factors including their national interest and foreign policy objectives. Beyond those factors, the media here rely on news agencies for most of their reporting on Africa as few have correspondents on the ground in the continent.

So, if you have a biased or wrong reporting by an agency, it will simply be replicated all over the world. This is an important factor in understanding Western media coverage of Africa.

Having said that, Africa still produces opportunities for its negative portrayal. We as Africans have to own up to that. If there aren’t negative things happening, the media would find it difficult to invent them.

Look at the last elections in Uganda or the insecurity in Nigeria. How else could they report about these things without being negative?

You are an advocate of legal migration, what is your advice for people intending to migrate to Germany and other developed nations?

Migration is a fact of life, a fact of the human experience. People have always migrated and will continue to do so for various reasons.

However, basing a decision to migrate on false expectations could be very dangerous and even fatal. More than 20,000 migrants have perished in the Mediterranean since 2014, according to the International Organisation for Migration.

My message to young people is, look before you leave. Get reliable information about the place you’re heading to, learn about the challenges of settling down there, the legal requirements and so on and so forth.

Don’t simply leave what you are doing and head abroad without an inkling of what awaits you there. This is my message. Migration is not always a better option and don’t overlook opportunities for self-actualisation at home. 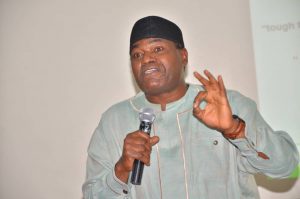 What should guide media reporting of migration issues?

It’s important for journalists covering migration to research more on the motivation for migrating and the situation of those in the migration process. That will give them a bigger picture that enables journalists to promote a culture of safe migration.

What skills gaps have you noticed media job seekers and what should they do to be more employable?

Young journalists should be versed in content management; they should be able to post their articles themselves and get images legally and edit them to illustrate such stories.

They should be able to research on the go and have the memory of elephants. In the rush to publish before the news gets stale, we forget in many cases to link our reports to their roots. This is why I believe that the journalist that we need has to be an allrounder. But can they be adequately remunerated? I don’t think so.

I, therefore, think that whoever goes into journalism should be driven more by their passion for the profession and social change.

How do you see the future of journalism?

Most publishers are faced with commercial sustainability challenges; they can hardly afford to pay good wages and spend money on reporting.

News for free on the internet is not sustainable. You spend hours or days and sometimes weeks and months on a good story and have to post it for free reading.

In fact, you even have to find ways to make people aware of it so that it can be read. Imagine! Publishers spend as much time on how to become visible on the internet as they do on producing news these days.

My hope is that publishers would find a way to monetize their offerings. There are many attempts at doing that in Europe, but the result has not been encouraging. My fear is that many issues, very important ones at that, will continue to remain unreported or underreported.

'What I learnt from my Engineer turned journalist editor'

Interviews
Author Lekan OtufodunrinPosted on February 27, 2013
Malam Tukur Abdulrahman is the Managing Director/Editor-in-Chief of the New Nigerian Newspapers Limited. He had edited the vernacular Gaskiya Ta fi Kwabo and the...