The former Manager, Editorial Training and Language Control of The Punch Newspaper, Mr Seth Akintoye who retired from the company in June last year, left earlier than he wanted to.

In his memoir titled Twist and Turns of Life: My birth, Career and Faith published in January, this year, Akintoye explained that his decision to retire at 64, a year ahead of the mandatory 65 years retirement age in the company, followed the demand for his resignation by the management when staff were laid off due to the impact of Coronavirus. 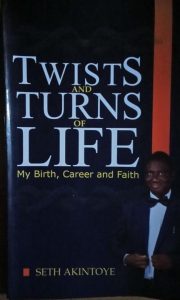 After no fewer than 50 workers of the company were issued letters of disengagement on May 29 and he was not affected, Akintoye who joined The Punch in May 2000, resumed work on June 1, 2020, thinking “ the siege was over”, but he was wrong.

According to him, he got a call from the Executive Director to report to the boardroom and the Managing Director/Editor-in-Chief who later joined in the meeting took time to explain the precarious situation the company had found itself as a result of the COVID-19 pandemic and asked for his resignation.

Akintoye’s response which he said “could only have come from the Holy Ghost” got him a sympathetic offer of early retirement instead of the resignation earlier demanded.

“ I said at 64, and after serving the company meritoriously for 20 years, I only looked forward to a blissful retirement. When a person attains the age of 60 years, he does not resign; he retires, perhaps with substantial cash benefits!

“The MD nodded his head sympathetically that I could go on early retirement. Of course, PUNCH Handbook puts the retirement age at 65,” Akintoye who at various times served as Assistant News Editor, News Editor, Deputy Editor, Online and Investigation Editor in the company stated.

Akintoye’s retirement letter of June 1, 2020, to take effect from July 1, in which he said he counted himself lucky to have the rare privilege to be in the service of the company till them as nearly all his age mates have retired,  was accepted in a letter dated June 23,2020.

“The company acknowledges your contribution to its growth over the years as you served in various capacities meritoriously, with remarkable commitment and devotion to duty and wishes you good health in your retirement years,” the company noted in its acceptance letter.

Other major highlights of his sojourn in The Punch in the book included his 13 months, and three weeks tenure as News Editor along with Alhaji Yusuf Alli as Editor, Steve Ayorinde’s tenure as editor that ended with the clash with former Executive Director Azubuike Ishiekwene and an occasion when the former Chairman, Chief Ajibola Ogunshola asked him why he should not be fired as Manager Editorial Training and Language Control over too many errors in the paper.

Before joining The Punch, Akintoye worked in The Guardian for nine- and – a half years where he was an authority in health reporting.

*Copies of the book, Twists and Turns of Life are available for sale at Media Career Development Network Resource Centre. Call 08050498530 ( WhatsApp) or send a mail to info@mediacareerng.org